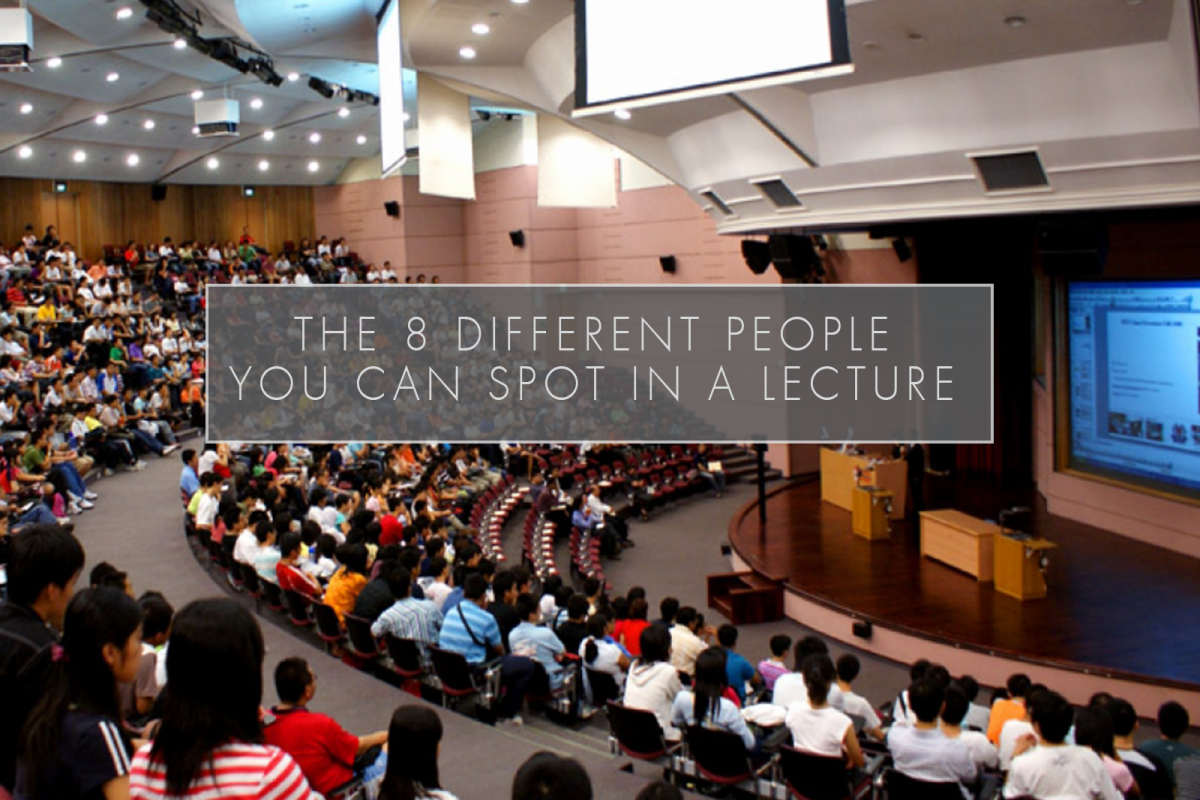 The 8 different people you can spot in a lecture

Have you ever been in a lecture and zoned out so much that you catch yourself twenty minutes in staring at someone else’s computer screen or listening in on the intense whispering beside you. Whether it’s a 9am or a 3pm lecture, one thing’s for sure, there’s always going to be the same types of people stealing your attention and without them, lectures just wouldn’t be as interesting…

Unfortunately for the snoozer, making it to their 9am lecture just hasn’t paid off. They’re most commonly spotted near the back, silently snoozing behind their laptop screen. Despite the extra-large coffee cup beside them, the caffeine isn’t doing anything to keep the snoozer’s eyes open and they’d have been better off just staying in bed.

The Facebook stalker is definitely not the most subtle person in the room and with their laptop wide open and a lecture hall full of people sat behind them, we can all see exactly who they’re Facebook stalking (let’s just hope it’s not someone in the room.)

You can spot a question-asker by the fact they’re usually one of the first to arrive and sitting right in the middle at the front, they will spend the lecture asking questions at every opportunity – or worse attempting to challenge the lecturer with a counter argument. They’re guaranteed to annoy everyone in the room, even the poor lecturer who’s just trying to finish his talk before being interrupted again.

This person was either so late getting up that they didn’t have time to get dressed or they just simply couldn’t be bothered but either way (although they might look stupid) they’re definitely the most comfortable in the room.
6.      The gossiper

The gossiper will sit near the back of the room and uses lectures to catch up with friends from her course, they’ll spend the entire hour filling each other in on their lives since the last lecture they had together… yesterday. Although this is seriously annoying for anyone near by who actually wants to concentrate on the professor (for once), listening in on the gossiper’s antics from the previous night can actually be quite entertaining if the lecture is getting dull.

The one who’s always hungry will spend the first portion of the lecture embarrassingly attempting to hide the loud gurgling noises coming from his stomach before finally admitting defeat, pulling out some sort of snack from his bag and proceeding to munch noisily throughout the second half.

It’s nearly the end of the year and the one who’s always late still hasn’t got to grips with his timings. He’ll noisily enter the lecture theatre a good twenty minutes in, with a waved hand as an apology before clumsily finding the most inconvenient seat and joining the rest of the chaos that is your lecture.